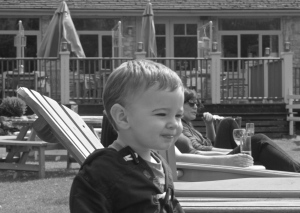 My son is a social bean. He gets it from his mother. Not me at all. I’m not social. I hate people. Even you.

Anyway, as his voice and gestures become more developed he has improved his ability to make people aware of him. Unsuspecting members of the public will be yelled at, given a big grin and waved at in that open, close, open, close hand gesture particular to very young children and bookmakers.

As we’ve travelled around the south of England he has beckoned over any number of people – I’ll be honest, mostly young and attractive blonde women – in his one baby bid to make everyone his friend.

Which is fine when the beckonees are young and attractive blonde women. Top tip single chaps, borrow a baby and hang around outside shopping centres. We have one you can hire for very reasonable rates.

No, young attractive people are fine. In fact, most people are fine. Kindly old ladies? Not an issue. Chinese tourists? I can speak terrible Mandarin to them. Those charity collectors that want your bank details? Okay, a little awkward but not the end of the world.

All these people are fine. Unfortunately, and as previously intimated, the boy wants to make everyone his friend.

I was standing outside the West Quay shopping centre in Southampton whilst the wife loaded up on lunch supplies. The boy was doing his bit for world peace by randomly waving at strangers when I saw a figure striding purposely towards the entrance of the mall.

It was a man, he wore a dark brown leather jacket with scuff marks. A faded red hood fell out of the back of the jacket’s collar, the now pinkish fabric stained with paint and bleach. His dusty black jeans were tucked into his clomping bovver boots which were also bedraggled with age, neglect and overuse. His hands were darkened with grime and his fingers carried those huge skull rings favoured by death metal groups and occultists.

A scruffy beard sprouted from the lower part of his face and his eyes were locked in unhinged and predatory determination. He looked very much like a man on his way to commit a mass shooting.

Now I know we should not make snap judgements about people based on their appearance. I appreciate that. But on some instinctive level I knew that to make eye contact with this person would mean either an aggressive round of ‘what you looking at?’ or a Stanley knife in the soft parts.

Alas, the boy has yet to develop these useful social filters.

“AH!” said the boy as the man strode past waving away and grinning his saliva-glossed grin.

The man blinked a few times and checked his march, he looked, if anything confused by this intrusion into his world.

I’d imagine his to-do list for the day went something along the lines of:

Get up.
Wear same clothes as every day.
Eat cold beans from the tin with a Stanley knife.
Use plasters on cuts to mouth.
Grab assault rifle.
Go to shops.
Ask for new Skyrim game.
Get angry when shop assistants explain to me that there isn’t one.
They are just lying to me.
They hate me.
They all hate me.
I hate them.
Murder, kill, death.

The sight of a small boy sat in a buggy, waving contentedly in warm English sunshine doesn’t really fit into this plan. The man paused for a second stared at the boy for a moment, grunted and continued his hate filled walk.

I sighed with relief.

‘Rah ba dah la ba?’ said the boy loudly, continuing to wave at the man’s back. ‘Tee heheheh he ha!’ the boy continued.

‘Don’t laugh at him, he might think you’re mocking’ I said in a forced whisper. The boy just looked up and smiled, before rummaging around under his leg to find a partially-chewed and soggy raisin from earlier in the day. He inspected it briefly and then popped it in his mouth.

About ten minutes later the man came out again from the shopping centre with a big bunch of flowers and a helium balloon bobbing around jauntily in the light breeze. The balloon said ‘Happy Birthday Mum’ and had a picture of a teddy bear on it.

4 Replies to “Waving at Nutters”