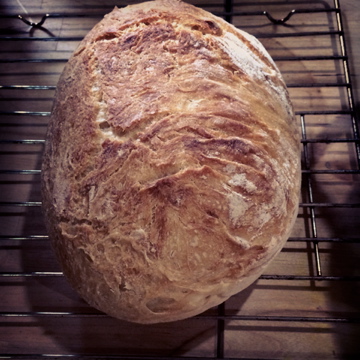 I have finished my journey to become someone who can throw together a loaf of bread to feed the family. It really isn’t hard, it just takes a bit of trial, error and feline personification. I’ve been playing with the recipe and I think I’ve got it as close to perfect as I think is possible.

For a bread that consists of four ingredients, all of which I can see from where I’m typing on the kitchen table and all of which I can pronounce I think it’s pretty damn good. It’s certainly better than the semi-sweet, barely proved, doughy, mush that is passed off as bread in the supermarket. And it’s light on the pocket (depending on which flour you choose to buy) making it a winner for the old bank balance.

I’ve experimented with both a white and a wholemeal loaf and will include the recipes for each below. It’s the same general principles but with a slight variation in ingredients. This is designed to be made in the tropics so if you live in colder climes a longer first proving may be needed to get the yeast going great guns. Alternatively you can reduce the salt as it has a limiting effect on the action of the yeast.

No Knead Bread For The Tropics

In a large mixing bowl, mix together your dry ingredients. Now add the water and stir together until you get a firm shaggy mixture.

Cover this with cling-film and go to bed.

Nine hours later, get out of bed. Did you sleep well? Good.

Take a glass bowl and lightly oil the inside with olive oil.

Now heavily flour a board and your hands and turn the mixture on to it. With a dough scraper (or a spatula) fold the dough on itself from each side (use the spatula if the dough is wet). Now turn it into your oiled bowl, seam-side down, and cover again with cling-film.

An hour and a half into the second proving, pre-heat the oven with a heavy casserole pot (I use my trusty Staub 22cm cast-iron for this) at 240 C or a bit less if it’s a fan (I put mine on 210 C). Make sure the lid is on.

Once the second proving is done, tip the dough into the pan (no oiling or grease needed) put the lid on and bake for 30 mins.

After 30 minutes is up, take off the lid and bake for another 10 or so minutes to make the crust. 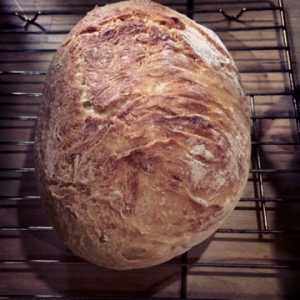 Take it out of the oven and listen to it crackle at it cools, tap the bottom; it’s done it it’s hollow sounding. Beckon over passers by to witness how impressive your baking skills are. Feel free to be a bit smug and try to mention it in every conversation you have. “I’m so sorry your mother passed away. She liked bread didn’t she? Yes well, funnily enough I’m now an accomplished baker. No, it’s really very easy.”

No Knead Wholemeal Bread For The Tropics

Follow the method above exactly the same except prove for 11 hours. Wholemeal flour is harder to make rise (as it is denser) so reducing the salt levels, increasing the water content and extending the proving time give the yeast the best possible environment to bump uglies, feed like buggery and make lots of glorious bread rising carbon dioxide.

I prefer the wholemeal loaf in terms of flavour and it’s nice to know that it is doing good by my family.

One Reply to “The No Knead Bread Saga: Part 4 – Catharsis”